Map Source and more information on Austria can be found at, Winesfromaustria.com

Breakdown by Variety Planted in Austria:

Airén- This is Spain's most widely planted white grape variety. The bunches are large and tightly-packed. It produces wines with a characteristic bouquet and alcohol content between 12% vol. and 14% vol. It can be found, among other regions, in Ciudad Real (51% of planting), Toledo, Cuenca, Albacete, Murcia and Madrid. It is the main variety in Vinos de Madrid DO.

Albariño
White. Native to Galicia, with small, very sweet glyceric berries which produce high quality wines. It is the basic grape of Rías Baixas DO. There has been a dramatic increase in the area planted with this grape over the last few years.

Garnacha Tintorera
Red. This grape, also known as Alicante, is so-called because it is the only variety, along with Alicante Bouché, which has coloured flesh (tintorera comes from the verb teñir = to dye). It is widely planted in Albacete, Alicante, Orense and Pontevedra, and it is considered a main variety in Almansa DO.

Godello
White. A high quality, very aromatic grape. Native to Galicia, new planting has been encouraged in the last few years, especially in Valdeorras DO. It is considered a main variety in Valdeorras and Bierzo DOs.

Loureira
White high quality Galician grape that creates very aromatic wines. Authorised in Rías Baixas and Ribeiro DOs. There is also a red Loureira, but it is very rare.

Mencía
Red. According to recent studies, this grape is very similar to Cabernet Franc. It produces high quality wines and is most widely planted in León (68%), Zamora, Lugo and Orense provinces. It is considered a main variety in Valdeorras and Bierzo DOs.

Moscatel
White, superbly aromatic grape with a high sugar content. It produces very characteristic wines and is also frequently consumed directly as a dessert grape. Widely grown across the whole of Spain, it is particularly frequent in Valencia and Málaga. It is also considered a main variety in Málaga and Valencia DOs.

Palomino
White. A basic grape in Jerez wines, called Jerez outside this growing area. Its high yields led to extensive planting in many Spanish regions, especially Galicia. It flourishes in Cádiz (68%), Orense, Valladolid, Zamora and Huelva. It is considered a main variety in Jerez and Condado de Huelva DOs.

Pedro Ximénez
White grape with a high sugar content. To a greater or lesser extent, it is found almost everywhere in Spain, It is most widespread in Córdoba (68%), Badajoz, Málaga and Valencia and is considered a main variety in the following DOs: Jerez, Málaga, Montilla-Moriles, and Valencia.

Tinta de Toro
Red. Produces aromatic, good quality wines, although it does not give high yields. Some maintain that it is an acclimatised version of Tempranillo that has become adapted to the region of Zamora, and that this is also the origin of its name. It is considered a main variety of Toro DO

Torrontés
White. Originally from Galicia, it produces wines of little body and good acidity, with considerable personality and an intense bouquet. It can be found throughout Galicia and in Córdoba.

Treixadura
White. Native to Galicia, this is one of the most aromatic varieties of Galician grape, and its cultivation is being encouraged in a number of areas. It is considered a main variety in Ribeiro DO.

Verdejo
White. Very high quality and one of the best white varieties in Spain. It makes very aromatic, glyceric, soft wines with body. It is plentiful in Valladolid (69%), Segovia and Ávila. It is considered a main variety of Rueda DO.

Xarel.lo o Xarello
White. Together with the Macabeo and Parellada varieties, it makes up the trilogy of cava grapes. It produces very aromatic wines. It is considered a main variety in the Alella (where it is known as Pansá), Costers del Segre, Penedés and Tarragona DOs, as well as in denominated cava-producing areas.
Posted by Ryan Mullins at 11:01 PM No comments: 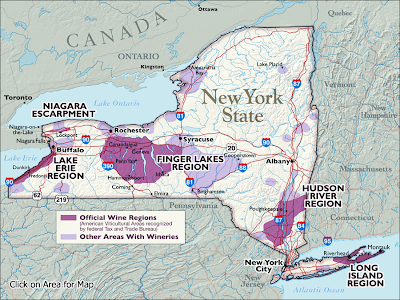 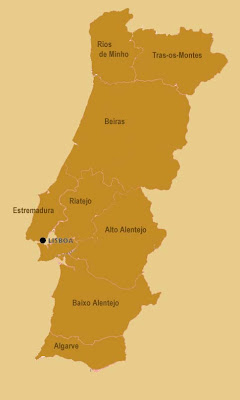 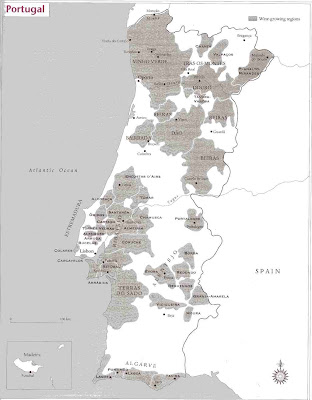 The second map was found at winesworld.net
Posted by Ryan Mullins at 9:42 PM 3 comments:

The ABC glossary of wine: Swapping parker for Dr Vino

"Zweigelt- Austria's most widely planted red grape, sometimes seen as a rosé. The red is fun, charming and a little peppery."


Things must and always do change, as seen in the classic case of MJ! Don't try and find parker in this glossary!

Posted by Ryan Mullins at 8:54 PM No comments: 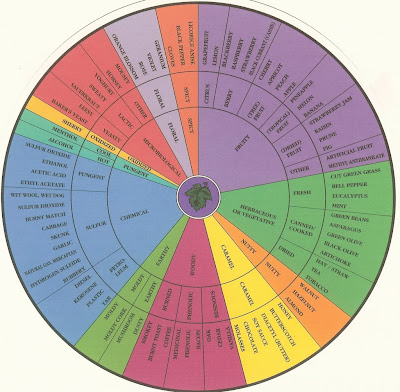 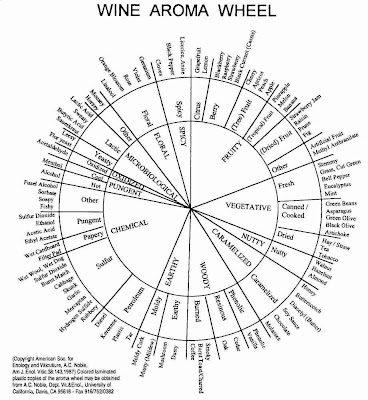 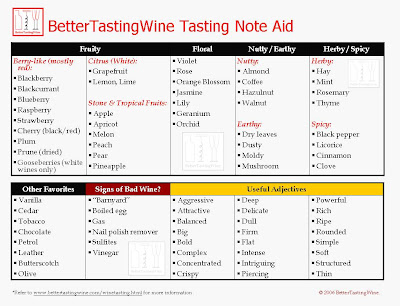 This was sourced from tastingnoteaid.com
Posted by Ryan Mullins at 12:32 AM No comments:

This is a must read for anyone in the wine industry and is planning on staying in it. Click on this link to get the full pdf.
Posted by Ryan Mullins at 11:28 PM No comments:

Murphy Goode's job of a lifetime.....The only choice in my mind is MR. DIRTY SOUTH HIMSELF!!!! 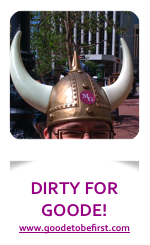 Show some love and check his video. Honestly, he had me at bacon frying in an iron skillet!
Posted by Ryan Mullins at 11:52 PM 1 comment:

Map of Barbaresco and the 2006 Vintage 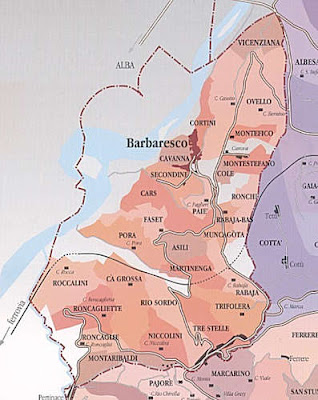 "The 2006 vintage began with nice spring weather. The warm temperatures in the first half of May caused early flowering around May 25 (flowering usually occurs in early June for Nebbiolo). Temperatures lowered at the beginning of June but without adversely affecting the flowering and fruit set of the vines. These conditions led to an abundant harvest. July brought temperatures higher than average. But August saw milder and more pleasant weather with warm days alternated with cooler and more ventilated days. Unlike other regions in Italy, rainfall was scarce and as a result, the season was relatively dry, especially for vineyards with the best exposure, which were warmer and drier. The abundant amount of fruit made summer thinning all the more important in order to rebalance production and allow for good ripening.

September arrived with healthy fruit with somewhat high sugar levels. But the development of the fruit and its aromas was however delayed, especially in the warmest vineyards with the best exposure. Two intense September rainstorms marked a break from otherwise summery conditions. The first happened around September 10 and this actually helped aromatic ripening to begin again and thus was helpful. The second rainfall arrived later, on September 25 and 26, when the fruit was already ripe. At that point, there was no point in waiting any more and as soon as the sun dried the fruit, we began to harvest on September 29 and we finished picking on October 7 after nine days of good weather that allowed us to harvest excellent, healthy fruit.

2006 Barbaresco will be an excellent Barbaresco with natural alcoholic content higher than 13.5%, with intense color and good acidity. A good wine for aging, from another vintage in a string of good vintages including 2004 and 2005."


This map was sourced from Stratsplace.com
Posted by Ryan Mullins at 2:38 PM 1 comment:

PHYLLOXERA, small, sap-eating, greenish insect of the genus Phylloxera, closely related to the aphid . Phylloxeras feed on leaves and roots, and many species produce galls on deciduous trees. Their life cycle is complex; one species is known to pass through 21 different stages. Most notorious of the group is the grape phylloxera, Phylloxera vitifoliae, native to E North America. The species has winged and wingless generations, the former causing galls on grape leaves and the latter feeding on the roots, causing nodules and eventually killing the vine. The grape phylloxera came close to destroying the wine industry of France after its accidental introduction in about 1860; grafting of susceptible European vines onto resistant North American root stock saved the European vineyards. Phylloxeras are classified in the phylum Arthropoda , class Insecta, order Homoptera, family Phylloxeridae.

Map of the Greek wine regions 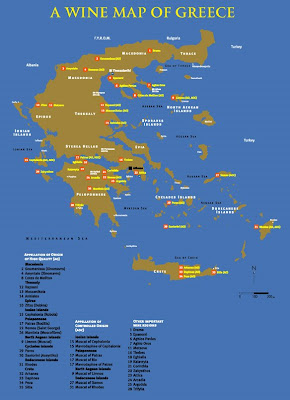 Map Sourced from Diamond Importer
Posted by Ryan Mullins at 10:14 AM No comments: